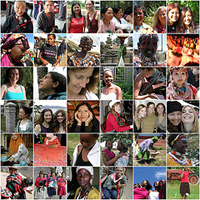 Women are increasing their power all over the world, and the world is profiting from it. A recent McKinsey survey showed an increase in profits in emerging markets for 34 percent of companies who’d made empowering women a priority. According to Catalyst, companies with women board members outperform those with all-male boards by 42% to 66% in terms of returns on sales, equity, and invested capital. In developing countries, women reinvest 90% of their income in their families and communities (men, only 30% to 40%).

As Jessica Bennett writes in Newsweek:“Between 1997 and 2002, female-led firms grew by nearly 20 percent, while overall firms grew by just 7 percent; by 2005, women represented more than a third of people involved in entrepreneurial activity, and the number of women-owned firms continues to grow at twice the rate of all U.S. firms. Indeed, it’s not a leap to say that female entrepreneurship may help revive the fortunes of the middle class in the developed world.”

American women account for 85% of consumer spending, according to Competitive Edge Magazine and EPM’s Marketing to Women. Women over 50 control $19 trillion and own more than three-fourths of U.S. financial wealth (MassMutual Financial Group).

By all accounts, women are stepping into their power and profiting more than ever before. Yet at the same time, women are losing jobs as men gain them in the “recovery.” Less than 20% of executives are female, and more executives are losing their jobs as Wall Street prunes away all but the old boys’ club. And most disturbing, the onslaught against women’s rights is on the rise, as demonstrated in the recent Personhood initiatives (among many other examples) and abhorrent treatment of women as objects (as shown by reports of serial sexual harassment, as in the case of Herman Cain). How can these two extreme opposite trends be growing side by side? And more important, what can we do about it?

What we are seeing is a backlash. The more women gain power and successfully fight for equality in practice, not just in theory, the more the patriarchy goes to extremes to push us back down. What we need to do, every last one of us, is to start using our power, but first we have to acknowledge and embrace that we are powerful. The evidence is there. We control more and more wealth. We are the key to being successful in this new world of technology and socially driven business. Yet inside us as individuals, too many of us are still products of a society in which women who speak up are bitches to be dismissed, in which our achievements are still looked at as great “for a woman” or the product of tokenism. We doubt ourselves, our abilities, our achievements. Many of us still try to please everyone—except ourselves.

This has to stop. We need to recognize that doing what is right for us can go hand in hand with what is right for the world. We need to band together, with other women and enlightened men, and use our voices, leverage our power, and demand change. Even more, we need to recognize that it is fully in our power to step in and create change. Our companies can reinvest in our communities. They can stand for social and environmental justice. The more successful we are, the more of a difference we can make. That’s why we need to start listening to our inner visionary now and unapologetically strive to be successful. The whole world is counting on us.

How can your success help others? How can you use it to make a difference in the world?