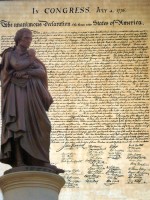 We see similar statistics when we look at the framing of our Constitution. Of the 55 framers, 14 were over 50 (6 of them, including Ben, over 60).

But of course, among the signatories of both important documents were many men in their 20s, 30s, and 40s. The founding of our nation is in fact a shining example of what can come of intergenerational cooperation. The wisdom and experience of the older men coupled with the fresh perspectives and idealism of the younger, all coming together into the creation of a nation that at that point was like no other in the history of the world.

Today we celebrate that nation’s founding. We celebrate these men of all ages and the many more women and men who took part in the fight for freedom that led to this moment, to this country that embodied in reality the lofty ideals of the Enlightenment.

We also celebrate the many generations of women and men who kept these ideals alive. After all, we would not be celebrating this country’s founding if it had ended up being another failed experiment. Throughout our history, we continued to hold ourselves accountable to these ideals—in the fight against slavery, the civil rights battle, and the ongoing struggles of women to gain equality in government, the workplace, the home, and even within our own bodies.

The civil rights movement and the women’s liberation movement in the latter half of the twentieth century were known for their broad mix of people of all ages, races, and genders. We tend to focus especially on the young faces in the protest photos, but these movements included and grew from the wisdom and experience of activists who had honed their skills earlier in the century and in the previous century to enfranchise women and people of color, and that their wisdom was in turn built on the experiences and perspectives of abolitionists. Again, these struggles united people of all ages, from Harriet Tubman, Frederick Douglass, and Lydia Marie Childs to Susan B. Anthony and Elizabeth Cady Stanton.

And all of these struggles for freedom and for the rights of all people ultimately continued the legacy embodied in the documents that established the country we celebrate today, the Declaration of Independence and the U.S. Constitution.

Let’s not forget where we came from, but let’s also not forget where we’ve been along the way. Only then can we ensure that we continue going forward in the right direction, all of us, women and men, at every age and stage of life—We the People.