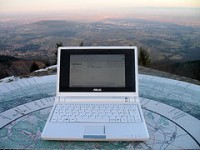 Every day, I read articles confirming the rise in entrepreneurship. This is not a flash-in-the-pan trend. This is face of the economy of the future. And that face is decidedly feminine.

Not only are women starting their own businesses at a consistently high rate, boomer women in particular are choosing this path as an alternative or part-time complement to retirement.

For some, the need to keep working is the impetus, but for many, other considerations are also driving forces: women who put their careers on hold for family are back with new verve to move forward in their field, and with all of us living longer and healthier lives, these women realistically have decades ahead of them to do so.

Some of these women as well as those who did not take time away are recognizing that the uncertainty equation has flipped. In the past, starting your own business might have seemed fraught with uncertainty and risk. Now, working for someone else is often far more uncertain and risky.

Whether you do the work you want to do, work that has meaning, is in someone else’s hands. The glass ceiling is still firmly in place in many organizations. Women are asking themselves whether they want to risk putting more of their time, energy, experience, and talent into companies that might not reward that work with promotion. Add to this the lingering uncertainty post-recession about the possibility of being laid off, and starting a business begins to seem like the only sensible solution.

Another factor is that technology has leveled the playing field, making it possible for solopreneurs to function like a big business without the overhead. In fact, as the Fortune article I link to above points out, big businesses are in trouble, unable to keep up with the flexibility, networking superiority, and mobility of small businesses.

Perhaps the biggest impetus, however, is the opportunity to pursue work that makes a difference in the world without sacrificing making a living. The Great Recession was a turning point for many, calling into question all that we believed was solid and bringing what really matters to us into sharp relief. Now, with the economy recovering, many people can’t unsee the insights they had.

Once we get a glimpse of the possibility to reinvent our stories for the future, to pursue meaningful work that will leave a legacy for generations, to pursue the path of Ageless Entrepreneurship, there’s no going back.