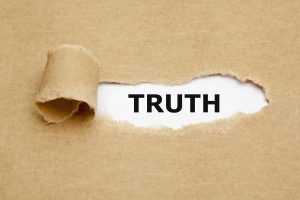 In another post, I talked about an attribute of visionaries: being truth tellers. They stand up for what’s right, regardless of the consequences, speaking the brutal truth when it needs to be said, and acting on that truth in their everyday lives.

I was reminded of this when I saw Ginger White on MSNBC talking about her 13-year affair with Republican presidential hopeful Herman Cain. As an unemployed single mother of two receiving financial support from Cain, she had everything to lose by speaking out. But as Cain denied allegations of sexual harassment and disparaged the women who were coming forward, White knew she had to tell the truth, and when given the chance, to apologize publicly to Gloria Cain.

She wasn’t an innocent victim in the affair. She is far from perfect. But unlike Cain, she took responsibility for her actions and told the truth despite the consequences. Telling the truth is often noble even when the actions we own are far from it.

Oprah did the same thing when she apologized to millions for supporting James Frey, who fabricated his memoir A Million Little Pieces. David Neeleman, chairman of Jet Blue, owned up to his company’s failings during the winter storm of 2006. Neither Oprah nor Neeleman had a spokesperson do this for them. They owned the mistakes.

As a counter-example, Martha Stewart refused to tell the truth about her insider trading and other fraudulent behavior, even after she was sentenced. In Fortune magazine, she even went so far as to say that what she really learned through it all was “I really cannot be destroyed.” In the end, this unwillingness to take responsibility, to be a truth teller, has all but destroyed her.

But of course, telling the truth often has consequences, and lying or evading the truth all too often does not. The latter is in part because as a patriarchal culture, especially in Corporate America and politics, too many people equate admitting mistakes with weakness. Truth telling, however, is anything but. It takes strength, and courage, to speak up, especially when we have to acknowledge our own imperfections. Truth telling also strengthens—our relationships, our communication, our trustworthiness, our leadership, and our ability to solve problems, for we can’t solve a problem without acknowledging the part we play in the problem, without acknowledging that a problem even exists.

To truly embody the visionary voice inside us all, we must be willing to tell the truth, even when it hurts us. Especially when it hurts us. We can only make a difference in the lives of other humans on this planet by owning the fact that we too are human.

What truth do you need to own up to, and to whom?