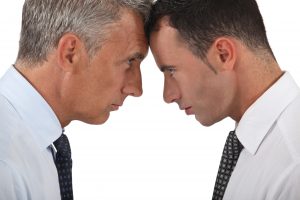 All over the world, people are working past the usual retirement ages. In some cases, this is due to the minimum age rising, and in others, people need or want the income, the security. But, as I’ve discussed before (e.g., The Retirement Age Myth), many people are continuing to work because they want to, because being 65, 70, 80, even 90 is not the same today as it once was. The idea of retiring at 65 today often feels as foreign as it would feel to a 45-year-old.

This trend is not going to go away, especially as more and more boomers approach and pass retirement age, whatever that age may end up being.

All over the media, we see constant discussion about the possible growing rift between the generations as younger people are (or simply feel they are) being edged out of the workforce by the over-65 crowd. Many take for granted as fact that every person who chooses not to retire is essentially taking a job from a younger person.

Yet this is not always true.  A  Bloomberg article quotes Eric Thode, senior expert at the research institute Bertelsmann Stiftung, who points out that countries like Germany and Sweden, which “have high rates of senior employment[,] also have high rates of youth employment. . . . Other countries fail both groups.”

Experienced workers are also filling positions that younger workers are not qualified for simply because they haven’t had the time to build the necessary skills, experience, and specialized knowledge. On the other hand, there certainly is a growing trend in hiring people over 60 for retail and similar jobs because of the perception that they will be more responsible than a younger employee. Even if they require a higher wage, the savings in training costs alone, a problem plaguing high-turnover service jobs, can be worth it.

But even with all of this in mind, focusing on ways to get more people to retire, under the belief that this will free up jobs for subsequent generations, is a mistake. Even if it were realistic, which it’s not (as I note above—eschewing retirement is a trend that will only continue to grow), increasing the numbers of people receiving retirement benefits would offset the possible gains in youth employment.

So what can we do about this situation, particularly about the possibility of increasing conflict and distance among generations over perceived and real job competition?

First, we need to communicate with each other about it. This seems obvious, but how often do the generations really talk about this situation with each other? It tends to get talked about through politicians and the media rather than in collaborative, hands-on, deliberately multigenerational conversations.

These conversations are crucial not only to get our fears and perceptions out in the open but also to clear up the misconceptions that can lead us all to make decisions based on incorrect information or assumptions.

Second, we need to explore alternative solutions together based on the probable future, not the past. Yes, social security was an effective solution to many problems that stemmed from the Great Depression, and it continues to be a necessary element in our economy, but pursuing ways to once again push millions of post-65 people out of the workforce is not going to work. Being 65 today is not even close to what it was in that era.

Third, we should look at generational partnerships, such as job sharing/mentorship arrangements that enable two people to be employed instead of one, enable training costs and salary to combine, stretching a company’s dollar and quickening the pace at which younger employees can gain the skills, knowledge, and some of the experience they need to be more valuable to that company and in the marketplace. These could work with a shifting percentage of time, starting with the mentor working 3/4 of the job, then gradually decreasing to 1/2, then 1/4, with an ultimate shift into mentoring another employee or into a consultant arrangement.

Which brings me to my fourth and final point (in this post, anyway). We need to encourage people over 60 (and in fact over 40 and 50) to remain employed by starting their own businesses. These could be simple solopreneur operations or larger operations that would not only remove the competition for the same job between two generations, it would generate employment.

As I’ve talked about many times before, the future of the marketplace (and the world) lies in the rapidly growing values-based business model. More and more people are spending their money consciously, choosing to buy from companies who are making a difference in the world over those who aren’t, and more often than not, these are small women-led businesses.

People, organizations, and governments need to focus on encouraging experienced professionals and executives, especially women, to start businesses with a strong focus on the Triple Bottom Line—people, planet, profits. In this way, we can solve or at least ameliorate multiple societal problems simultaneously through the specific social missions of these companies as well as their effect on the job market, offering a way for all generations to make a living and a difference, and to secure their future and that of the world for generations to come.