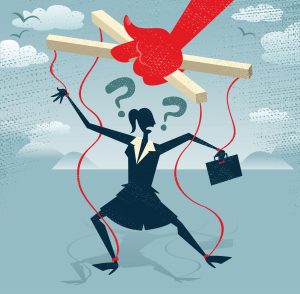 Women tend to have the blessing and the curse of being invisible, especially as we approach 50 and beyond. The negative side of being invisible is the world no longer seems to notice or care about us or what we have to say—if they ever did in the first place. We seem to lose our voice because no one is listening. Sometimes, we don’t even use our voice because we don’t believe we’ll be heard, so why bother? Being invisible contributes to the vexing problem of low self-esteem, robbing women of the confidence they need to stand up and make a difference.

But there is a positive side to being invisible, a power to being able to work behind the scenes. One that we can utilize and bend to our will and doing our bidding.  We have the the profound opportunity to influence others to make earth-shattering changes without anyone even realizing we are doing so.

Business expert and researcher Jim Collins studied 1,435 top companies and found that only 11 companies managed sustained growth. At the helm of each company was a leader with a clear vision paired with humility, working quietly behind the scenes to shape the organization. This is but one example of the power of invisibility—if we learn to understand, embrace, and leverage it.

This concept is not new. In fact, it’s ancient, found, among other places, in Taoist wisdom. As Lao Tzu wrote of the invisible power of a leader:

“When actions are performed
Without unnecessary speech,
People say “We did it!”

David Straker describes this principle further: “In Tao, a leader is sage and invisible. With touch so light, sensitivity so sharply honed, the leader seems to do nothing special, yet somehow they achieve their goals.” The wisdom is ancient but not prevalent in our patriarchal military-industrial society, in which only visible leaders are valued, and therefore the ego constantly disrupts the natural flow.

The masculine aspect is dominant, in some women as well as in men, making invisibility undesirable and all but impossible.

But women have the opportunity to harness their dominant feminine aspect, to go with the flow, making changes and collaborating with others in ways that go unnoticed by a society so focused on the visible, on the ego. When we fly under the radar of the good old boys’ network, we can make significant, sustainable changes without anyone standing in our way. This is why women must step forward today and act on their power to make a difference—through their votes, their purchases, their leadership, their vision, and yes, their success. Striving for meaningful, sustainable, and profitable success is necessary if we are to have the resources and power to lead significant change.

I suggest we start by recognizing the power of invisibility in the first place, and understanding that to be invisible doesn’t mean to be inadequate or without value or voice—just the opposite.

In what ways can you use your invisibility to maneuver and effect change?